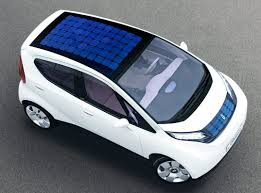 Solar cars contains Photovoltaic(PV) cells which converts sunlight into electricity for the propulsion of electric motors. The technologies used in aerospace, bicycle and automotive industries are combined together and used in solar cars. Solar cars are mainly built for solar car races. The World Solar Challenge and the North American Solar Challenge are the two famous solar car races.

Solar boats are electrical boats which use batteries to store free energy from the sun. People living on inland waterway crafts, sailing boats, space stations and houseboats depend on batteries in order to propel the boat. But batteries sometimes discharge and must fill it again. The solution for this problem is to use the solar boats.

The advantages of solar vehicles are: