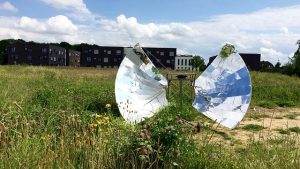 A solar cooker is a device which uses the energy from sun to heat or cook the food. The solar cooker is also known as Solar oven. The principles used in solar cooker are concentrating sunlight, converting light to heat, trapping heat and greenhouse effect.

Concentrating sunlight: A polished glass or metal is used to concentrate the light and heat from the sun on cooking area, in order to increase the heating power.

Converting light to heat: A solar cooker contains low reflective surface in order to convert the sunlight into heat, which in turn improves effectiveness of the cooker.

Trapping heat: It is important to bring down the temperature change inside the cooker from the air outside. A plastic bag or tightly sealed glass cover traps the hot air inside which allows the cooker to reach temperatures on cold and windy days similar to those possible on hot days.

The food placed inside solar cooker must be cut into smaller pieces. The solar cooker is turned towards the sun and left until the food is cooked. Generally food in the cooker is not stirred because opening of the cooker will allow the trapped heat to escape and thereby slow down the cooking process.

The factors that influence the solar cooking process are

The benefit of using solar cooker are