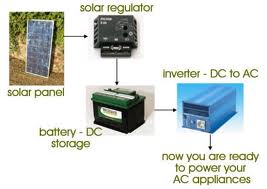 The usage of solar energy are becoming popular to save money on electric bills. The group of solar cells connected in series or in parallel manner is known as solar panel. The solar panel voltage is always greater than 12V.

Charge controller is also known as regulator. There are different types of regulators available.

The size of these regulators varies from 5Amps to 80Amps. The most commenly used type of regulators for smaller loads are normal and straight forward regulators. Maximum Power Point Tracking(MPPT) regulator is used for greater loads.