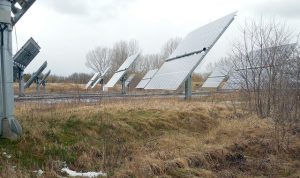 Solar vs Hydro energy
Solar energy is available everywhere in the world but there is a lack of hydro resources in some places. The components needed for hydro power generation is complicated whereas the components needed to generate solar power is easy to maintain.

Solar vs wind energy
Wind turbines requires lot of space and it produces noise pollution. But the solar panels require less space and it does not produce any hazard to the environment. Since it generate more noise it is most suitable for urban location.

Solar vs Geothermal energy
The use of geothermal energy is limited because it uses the energy certainly near the tectonic plates which cause danger to the environment. But the solar panels use the energy directly from the sun.

Solar vs biomass energy
Burning of biomass substance creates CO2 emissions, which is even less when compared to the burning of fossil fuels like coal. But the emission of CO2 cause hazard to the surroundings whereas the solar energy does not create any emission to produce electricity.

Solar vs bio fuel energy
The energy output from bio fuel is very low when compared to the solar energy efficiency. Bio fuel energy is obtained by burning the plant and animal substance which produce CO2 emissions causing damage to the environment.